Preparing the ground for Spring 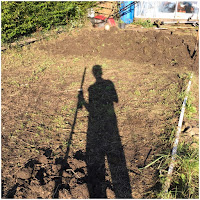 The biggest job ahead of us this Autumn is preparing the unloved plot for the Spring. As it’s not been used for so long it has become really overgrown. There are even still some old forgotten potatoes in the ground… My job for today was to turn over the ground to the right hand side of the plot and cover it with black plastic sheeting in preparation for our sections and planters. 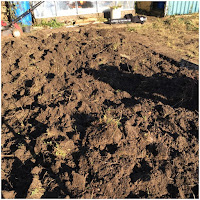 So I picked up my shovel and started turning the ground. I started by digging a trench along the top section of the plot, then worked in lines just in front of the trench so that every shovelful I dug up was turned and placed into the trench. As you work along in rows, the ground you dig and turn gets put into the trench dug by the previous row. It makes turning a lot easier and my OCD was happy with the neat lines I was digging through the soil. I also removed closed to 100 potatoes that were still sleeping, I don’t think I’ll risk eating them. I felt a little pang of sadness that the previous plot-holder didn’t get chance to dig his potatoes up (the gentleman had passed away around a year ago).

I stopped around halfway for a breather and a drink, only to realise that my water bottle was empty and I didn’t know if there was anywhere to get drinking water on the allotment. Digging is thirsty work. At least I know for next time to bring more water! 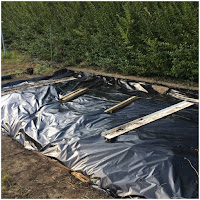 The section I worked on today is around 3m by 6m and it took me just under two hours to turn, which I think is quite good going for someone as small as me! I really should invest in a rotavator.

Once the ground was turned, I dug a trench all around the outside and then laid the plastic sheeting. I bought a roll off Ebay for around £50 for 4m by 50m which I think is pretty good value. The plastic will act as a weed barrier and hopefully kill of most of the roots under the soil until we’re ready to use it in the Spring. 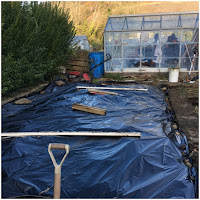 I did borrow my brother’s battery powered strimmer with the intention to clear more of the long grass but as the sun had hidden behind the mountain by 3pm I called it quits. It gets really cold when the sun goes in.

Now to have a hot cuppa and a shower. Phew! 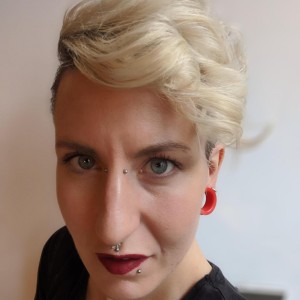